Showing posts from 2013
Show all

A glimpse of our political future

December 30, 2013
Year 2050
Act 1 - The crowning The FIRST party of India is still controlled by a dynasty. They are true rulers. The family has been controlling the party very well. The Grandma has grown old but her son just couldnt grow up. He kept everybody guessing and never really took the challenge to be the No. 1. He is now nicknamed "Evergreen No. 2". Old age has started showing signs. She had been on too many sick leaves. But she was never ready to sideline her amul baby.

The core committee meeting was going on. The next general elections have been declared. The main agenda for today's meeting was to decide who is going to lead the party into the elections. The Grandma was unusually silent today. She seemed to be listening to the arguments but her mind was wandering. Can she hold on for one more election? Will the No. 2 be ready to accept the top position, though he had rejected it this morning at the breakfast table. Suddenly, BANG!!!! It was a thud on the desk. Everybody muted…
Post a Comment
Read more 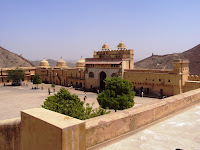 April 6, 2012
The third one in the series was the hottest even though it was the beginning of the summer.

It was a summer vacation for two of my cousins who had completed her board exams in March. They planned a Delhi-Agra-Jaipur trip covering 15 days. My wife's cousin (Shruthi) had also finished her exams and wanted to visit us in Delhi. She got along with my uncle and family on what she calls an "Incredulous Journey" to the capital city. You can read the whole of that in her own blog, which she hasnt started yet :)

I had planned for the Jaipur trip during the "Good Friday" long weekend so that I can accompany them. There was lot of confusion on who all would join. My wife and mom wanted to visit Jaipur as they hadn't been there before. Dad has been there umpteen number of times, so he was most reluctant for the hot ordeal. My local guardians too had been to Jaipur many times, but they were cajoled to join the party.

August 03, 2013
"A trip to Jaipur in the hot and dry North Indian summer", that is the tag line of all the Jaipur trips that I have been to. The first one was in mid May of 2004, a part of an outing during my MTech, the second one in first week of July of 2006 for a friend's wedding and the third one in the first week of April 2012. All of them were equally interesting, so let me cover all of them here.

13 people from our MTech batch went on a training to CEERI, Pilani, Rajasthan. My first Jaipur trip was planned on the first weekend of the training. Jaipur was around 5hrs drive from Pilani. It was not really a straightforward trip. Our training coordinator, Mr Runthala, was very concerned about leaving us, with 5 girls, all alone on a trip. So he agreed to spare his Saturday and come along with us. But the next problem was that he dint want to take us to Jaipur. He wanted to take us to a temple, Salasar Balaji temple which was…
Post a Comment
Read more

Being a Keralite, everyone would ask me about the tourist destinations in Kerala and my usual reply would be "I havent been to any of the tourist places except Trivandrum" or Thiruvananthapuram as it is called now. I have spent most of my life outside Kerala and visits to the "Gods own country" would be for summer holidays to my ancestral home.
The regular visit to Kerala during my summer holidays is what made me love the "Gods own country". So an invitation to the backwaters in Alleppey was something that couldn't be rejected.
Alleppey (or Kuttanad - what the whole region is called in folklore) is a unique place on earth. The county is crisscrossed by natural water canals through which the sea water would come inland. The canals essentially created a set of islands which was lush green with paddy fields in the center and coconut trees lined up on the edges. If some islands are not so populated, it would be covered with trees and wild bushes. I am su…
3 comments
Read more
More posts