December 02, 2012
"A trip that many of us wanted but was approved at the last moment, yet turning out to be unique"
That's how I would describe this trip in short. My friend and family was visiting us in Bangalore and would be here for a week. But no holidays in the week meant there was only one day - Saturday - for any outing to be planned.

My friend's family had just wound up their 10 day pilgrimage and sight seeing trip. A week long break gave them energy and enthusiasm to venture out again for a day's trip. Amritanshu's dad was the most interested in seeing Mysore which was the captial of erstwhile Mysore Maharaja. My mom had also not been to Mysore. So she prompted me to check out the options.

Taking up few seats in a one-day sightseeing tour with any tour operator was the first choice. But it was voted out as it meant going to Majestic early in the morning to catch the bus. Also the bus would drop us back at Majestic well past midnight and it would be difficult to reach home negotiating with Bangalore auto-wallahs and taxis.

Hiring a cab was the next option - 4-seater or 8-seater. Amritanshu had to attend his training on Saturday. That ruled him out. My wife had been to Mysore couple of times. So she opted out. Amritanshu's wife and parents and my mom was the final list adding me as a guide. This meant there are 5 of us.

On Friday night, I decided I would drive. I had not been on a long drive ever. There were few raised eyebrows on the decision. Ultimately their wish to see Mysore palace and Vrindavan gardens prevailed and we were set to start at 6AM on 1st of December.

Cool winter morning, empty Bangalore roads and superb highway. We were there at Mysore Palace by 9.30AM. Read about my first long drive here. 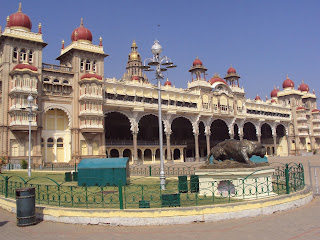 Tourists had just started trickling in. The parking lot was mostly empty. The ticket counter and entry queues lean. The palace was magnificent and wonderful. It was built by a wealthy king and is very well maintained.Unfortunately we are not allowed to take our cameras inside the palace.

Exquisite art work on the walls, roofs, pillars and floor. Marvelous paintings adorning the walls. Few antique items to show off - you find it in any palace, nothing special here.

The best part of the palace was the gallery (under the arches you see in this picture on the right) in the front side of the palace. Mysore is famous for its Dasara celebrations. The kings and the royal family and their guests would watch the Jumbo Savari (elephant procession) from this gallery.

Apart from the main palace, there is also a krishna temple inside the same campus. There was also a wooden palace. It would be a nice attraction for people who have not seen wooden houses. But for people coming from Kerala, land of wooden palaces, this one is disappointing.

On the way out of the palace, there were few stalls selling all kinds of sandal works. Uncle bought a few sandal sticks as a memoir and gift to people back home.

By the time we were out of the palace, the whole area was filled with school children on an excursion and hundreds of tourists coming along with the tour operators. Luckily for us, we were not trapped in that crowd.

It was almost lunch time. A friend had told us about a good restaurant. But searching for that restaurant was like going around a maze in the Mysore city. Finally we abandoned our search and settled for a decent looking restaurant where we could get our car parked. Its best not to describe the food. It reminded me of all the mediocre places where I had been for lunch when I was with any tour operator - Agra, Jaipur to name a few.

Finishing off lunch, we headed towards our next destination - Vrindavan Gardens and Krishna Raja Sagar (KRS) dam and reservoir. It is located 15kms from Mysore city. The road to KRS dam is pathetic. It took us almost 45min to reach the place.

A bright sunny afternoon and the vast open space in front of the dam forced me to don my sun glasses. The vrindavan gardens is famous for its fountains and lighting. The park typically opens at 6PM and closes at 8.30PM. The light and sound show at the musical fountain is the main attraction.

My previous visit to Vrindavan Gardens was the fifth semester trip from college. We had enjoyed the walk on top of the dam looking across the vast reservoir and looking down at the gardens during sunset. I had also seen the musical fountain and the garden decorated with lights. 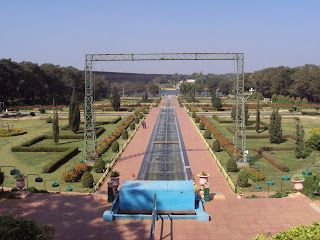 Not this time. Here we were, in the middle of the day with sun beating down. But there was a cool wind blowing from the reservoir which was keeping the temperatures moderate.

There was a plus point for us.  Very few people were there other than us. It was like a huge private park. And we had the luxury of a photoshoot without any crowd in the background.

We tried our luck to go on top of the dam. But we were stopped by the security guards. The dam area has restricted access due to Cauvery dispute between Karnataka and Tamil Nadu. The guards did some questioning to figure out if we were Tamilians. As is prevalent in most parts of India, we tried "Jugaad" to go to the dam for just a photo of the reservoir. But we refused to pay bribe (Anna Hazare, are you listening!!) and returned.

Started the return journey at 3.30PM. Exactly as planned. What a punctuality!!

The return drive took longer. Traffic was little more. The worst part was the last 25kms from Bannerghatta Road to home. It was through the evening city traffic and took us almost 2hrs.

That was a successful 360kms of looonnnnggg drive. Not so long. Next one should be 450kms to Palakkad
travelogue