Being a Keralite, everyone would ask me about the tourist destinations in Kerala and my usual reply would be "I havent been to any of the tourist places except Trivandrum" or Thiruvananthapuram as it is called now. I have spent most of my life outside Kerala and visits to the "Gods own country" would be for summer holidays to my ancestral home.


The regular visit to Kerala during my summer holidays is what made me love the "Gods own country". So an invitation to the backwaters in Alleppey was something that couldn't be rejected.

Alleppey (or Kuttanad - what the whole region is called in folklore) is a unique place on earth. The county is crisscrossed by natural water canals through which the sea water would come inland. The canals essentially created a set of islands which was lush green with paddy fields in the center and coconut trees lined up on the edges. If some islands are not so populated, it would be covered with trees and wild bushes. I am sure you cant find any other place greener than this. 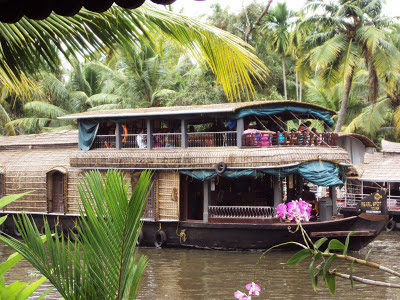 The arrangement of natural canals resulted in boats being the main mode of transport. It also gave birth to the concept of house boats. House boats are huge in size like a floating hotel. There would be around 3-4 suites, dining room, kitchen, observation deck on the top and front.


The usual tour package involves a 23 hr journey taking you though various canals and backwaters (kayal). The journey starts off at 11 AM check in to the boat at various boarding points dotted along the canals. The trip would end at 10 AM the next day morning. In between, we spend our time on-board with some cultural activities and fun games for entertainment. Food and beverages (which is abundant) is served. In many boats they catch fishes from the kayal and cook them. That's as fresh as you can get! 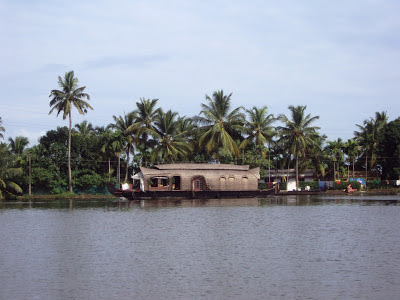 Well ours was different. Ours here mean me, my wife, sis-in-law, co-brother, nephew and my dad and mom in laws. With a small kid with us, it might have been tough time managing on a boat with not much of freedom to roam around. Moreover one whole day on a boat might be a boredom. So we opted for a resort. And I should say our choice turned out to be excellent. 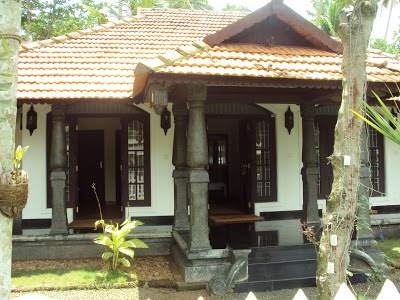 This resort is wonderfully located on one of the canals near Punnamada Kayal. The resort is small, calm and quiet. 4-5 rooms built in traditional Kerala style with stone pillars and tiled roof. The place is well maintained and neat and clean. There is a small lawn with a swing and some huts for dining.

We took a passenger train from Ernakulam to Alleppey. Getting to the resort was not difficult as the auto-rickshaw guys knew the place (It seems to be located in a popular area). We got to a board that said Bamboo Lagoon. And thats it. There was just the canal in front of us. A nice old lady there told us that the resort is across the canal and she coo-ed to the guy at the resort to bring a boat. Luckily they have a complementary pick and drop to mainland. 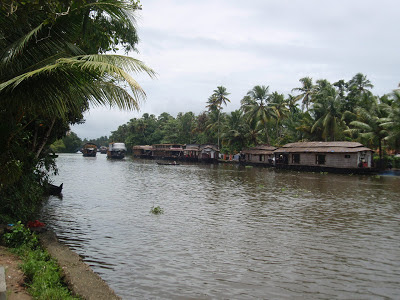 There is not much that you can do at the resort. So time was spent letting Pranav roam around and rest of us watching his gimmicks. There was some photography session. Some customary group pics, someone (you-know-who) trying various poses, some snaps of the resort. The better part was the canal. Almost all the house boats in Alleppey seemed to be passing in canal. Each one having a unique name and a unique style. Some would be small with one-tier. Some of them were huge with two decks and large crowd waving to us.


It was nearing lunch time. Or I should say it was past the usual lunch time. All of us were terribly hungry. While booking, we had told them to prepare lunch for us at the resort. But they didn't!! :-(

After a long wait, we had our lunch served. I was afraid that in the land of backwaters sea food might be popular and vegetarian food would be average. But our lunch was excellent. It was so good that we decided to have our dinner also at the resort rather than scouting for a restaurant in Alleppey town.

Next plan was boating. The resort owner has a boat which can be hired on a per hour basis. We zero-ed in on the 3 hr trip costing 1500. It would cover all the major attractions - Punnamada Kayal, 3-4 main waterways, the venue for the famous Nehru Trophy Boat Race. 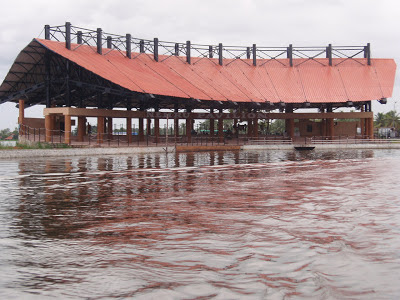 We also had the luck to see varied landscapes in varied background settings. We moved through the SN Canal along paddy fields and coconut trees in the evening sun and reached the Punnamada Kayal. It is one of the largest backwater in Kerala. The vast expanse of water extends till the horizon. A few scenic pics below. Unfortunately we couldn't capture the beauty of setting sun into the Kayal. Clouds came in and it started raining. It rained for about an hr. So we stopped at one of the banks to enjoy hot chaya (tea) and kadi (snacks) from a thattu-kada (local tea stall). 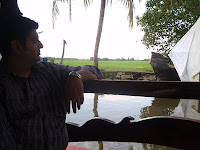 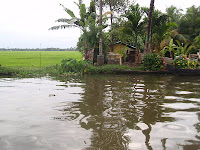 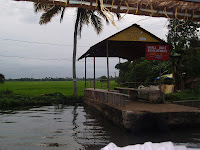 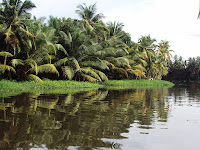 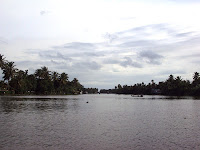 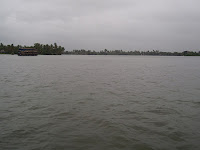 A thing to note in the backwaters are mosquitoes. They are in plenty. You start feeling it as soon as the sun sets. It is almost impossible to sit outdoors. We got back indoors. Ordered chappathi and kurma for dinner. We ordered soon enough considering the amount of time they took for preparing the lunch :-)

After sometime of general gossip, me and my co-brother were in for a surprise. Our mother-in-law had prepared a quiz challenge to figure out which of her daughters have got a wiser partner. Want to take a guess who won?? Disclaimer: Don't go by the educational qualifications...

It turned out to be a Kaun Banega Crorepati kind of a contest with questions from different subjects. Without the omnipresent Google (is that a contradiction?), both of us were equally challenged and we really had to sharpen our memories and use our "Karakki Kuthal" (guessing the answer in a multiple choice question) tricks of Engineering entrance exam.

There was a cash prize for the winner and a lesser amount for the loser (anyways we are getting money!!). That made our spouses very excited and they had already started imagining their next shopping plans. They would have loved to help us out. But since they had already seen some of the questions (Question paper was leaked!!), they couldn't participate in the contest.

Anyways it came out that both of us were equally good and bad. We scored exactly same number of correct and wrong answers. I wouldn't put out the exact scores. :-P

The cash prize was shared by both of us and we decided to spend it the next day for a movie and dinner outing. 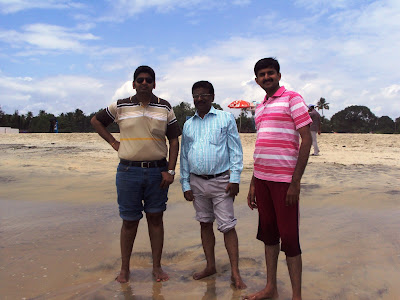 After the breakfast, we decided to head to the Alleppey beach. That's probably the only other tourist attraction available. Since the beach was at the other end of the city, we packed our bags and checked out from the resort. The day was bright and sunny but the cool breeze at the beach kept the temperatures down.

There was not much of crowd. We spent an hr or so there - feeling the sand and waves on our feet and taking some customary beach pics :-)

The trip to Alleppey was wound up with a lunch at a good vegetarian hotel (was it Arya Bhavan?) and the return journey was on board a passenger train to Ernakulam.

Postscript
The movie and dinner plan was still on. The elders and the kid and all the luggage was packed off to home and we 4 headed to the theatre to watch "Run Baby Run". It is not a remake of Run Lola Run. :-P
It was a decent Malayalam movie of our own superstar Mohanlal.
Dinner was at Saravana Bhavan (Not same as the famous one in Chennai, but still pretty decent).

And the next outing's being planned for Christmas!!! Destination Kangaroo Land!!!
travelogue

Pathin singh said…
Alleppey Houseboats is truly an alternate affair !! I have gone by kerala on my special first night which was exceptionally very much sorted out by MyHolidayTrip travel administrators. Making a trip to kerala and missing houseboat fun makes a fragmented outing.
1:03 PM