3 days before I got an email from my manager in US asking me to travel to California for a week for a meeting. Initially it was good news as I had not visited US for more than 2yrs. So it would be good to see folks in the office and meet my cousin at Los Angeles - that is always on my itinerary to USA.

But this time I was little sad too. My daughter is going to come to Bangalore for the first time on Sunday. And I wouldnt be here to receive her. :-(

After many rounds of checking possible routes with low airfares, I finally decided on BLR-HKG-SFO and SFO-LAX-HKG-BLR on return. The good part in this itinerary was I have a stop over of 13hrs at Hong Kong on the onward journey.

Googled all the must-see places in Hong Kong. Got some info from a friend who had travelled via Hong Kong  many times. Jotted down a possible itinerary (probably the first time I have ever done that).

I reached HKG at by Cathay Pacific flight at 11AM. Half an hour delay means I may have to squeeze the schedule. Hong Kong has visa on arrival for Indians (and of course many other countrymen) for a short stay of 15 days. I need it for 15 hrs. Only question asked by the immigration officer was "When is your onward flight".

The first thing I wanted was some change so that I can take the bus to Tung Chung cable car station. Money exchanger was the first option. After waiting for 15 min in the queue, the lady told me "Sorry, we dont give change. We only convert the currencies". Next attempt was at McD. I had already had my breakfast on the flight. So I chose a bottle of water and gave him 100HKD. He was startled but was kind enough to give me change, in the denominations that  I wanted. Nice guy..

Hong Kong (and probably all developed cities) have good sign boards. You dont really need to ask anyone. Moreover you may not find many locals. Most people in Hong Kong airport are tourists.

Tung Chung cable car terminal was like Sabarimala or Tirupathi. Waiting time - 45 min. Another hiccup in my schedule. I should have factored this in. It is a Saturday morning. And Tian Tian Budha is the first on the list of all tourists, and mine too. 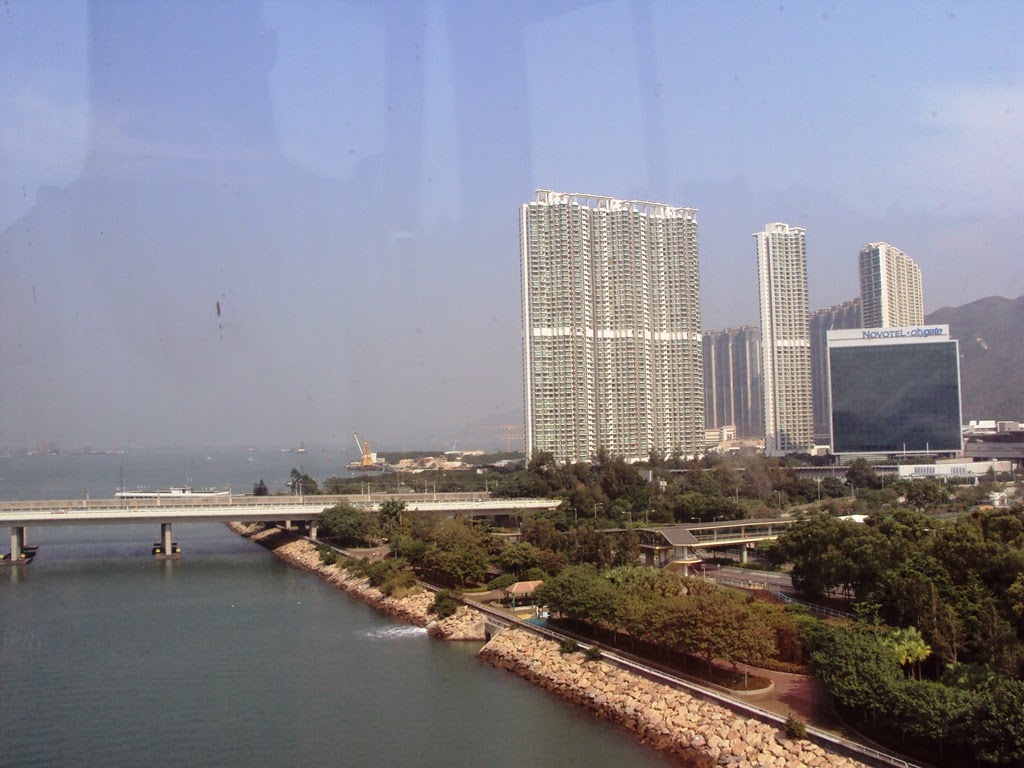 Passing through serpentine queues, I finally hopped, you literally have to hop into the moving cable car.

The first thing that would strike you in Hong Kong are the number of skyscrapers, especially if you are going there from a city like Bangalore which is pretty much flat. And there is a reason for that. Hong Kong is a small city, 70% of which is hilly. That leaves very less land for construction. Considering the number of travellers, my guess is that 50% of those skyscrapers are hotels. 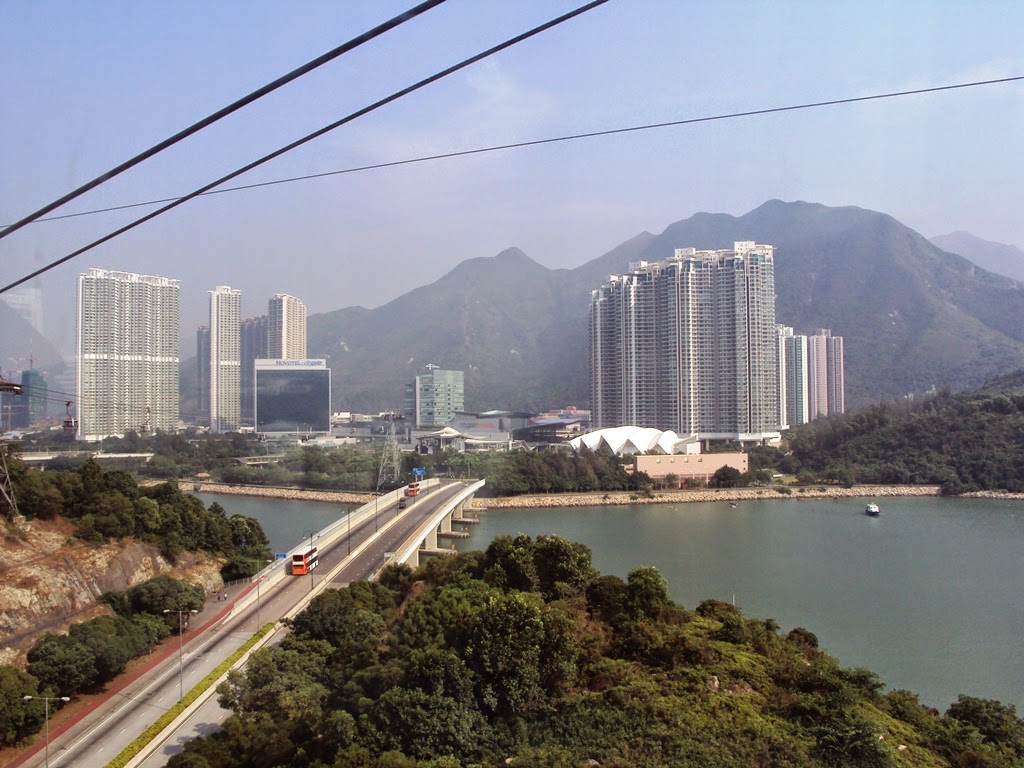 The cable car ascends around 300m to take you to the hill on which there is a huge Budha statue. From the cable car, you get excellent views of the airport, the bay, the green hills and of course skyscrapers.

How I wished I had an SLR camera!
Another thing that struck me was the number of Chinese (or probably Japanese/Korean/Taiwanese) tourists having SLR cameras. It seemed as if the age of Point and Shoot cameras is bygone. 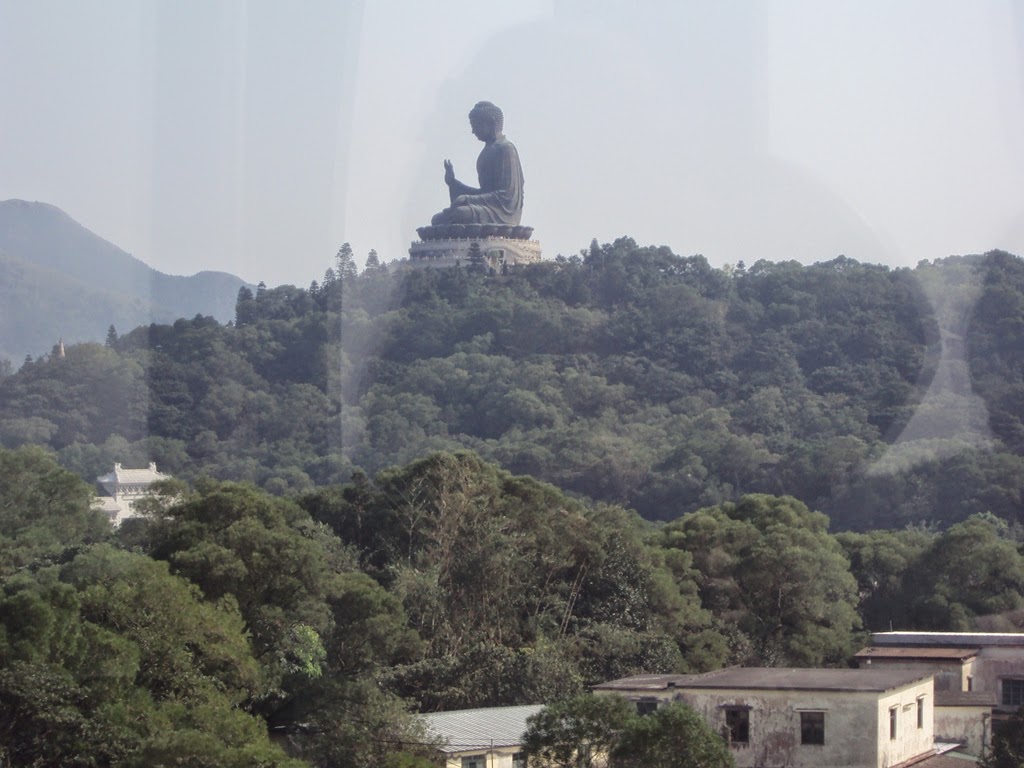 The cable car picks up height to a small hill and takes a turn towards the next. Now all that you could see beneath is lush greenery and the sparkling waters of the bay. After couple of minutes you get a glimpse of the Budha, sitting on a platform blessing Hong Kong. 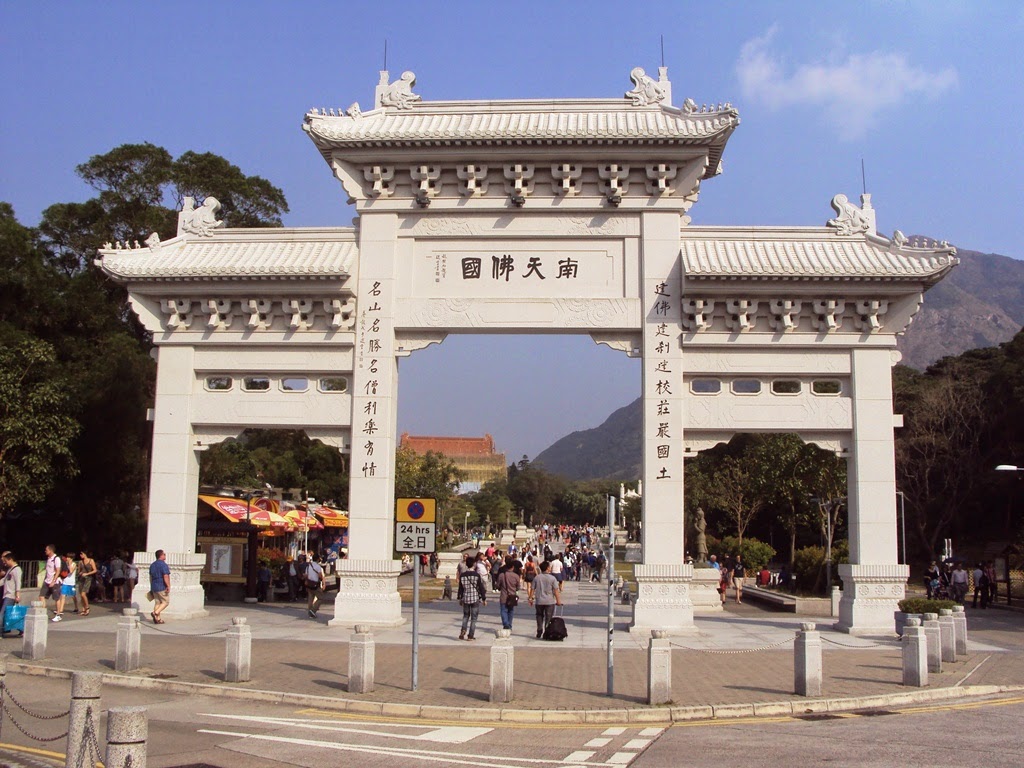 Cable car drops you at the Ngong Ping village. At the first sight of Subway, I decided to have lunch. This has been the safest option for me while travelling abroad. A veggie delight, parmesan oregano bread, 6 inch (sometimes footlong), a slice of cheese and heated, all veggies plus sweet onion sauce. And of course "Make it a meal" with baked lays potato chips and a medium drink. 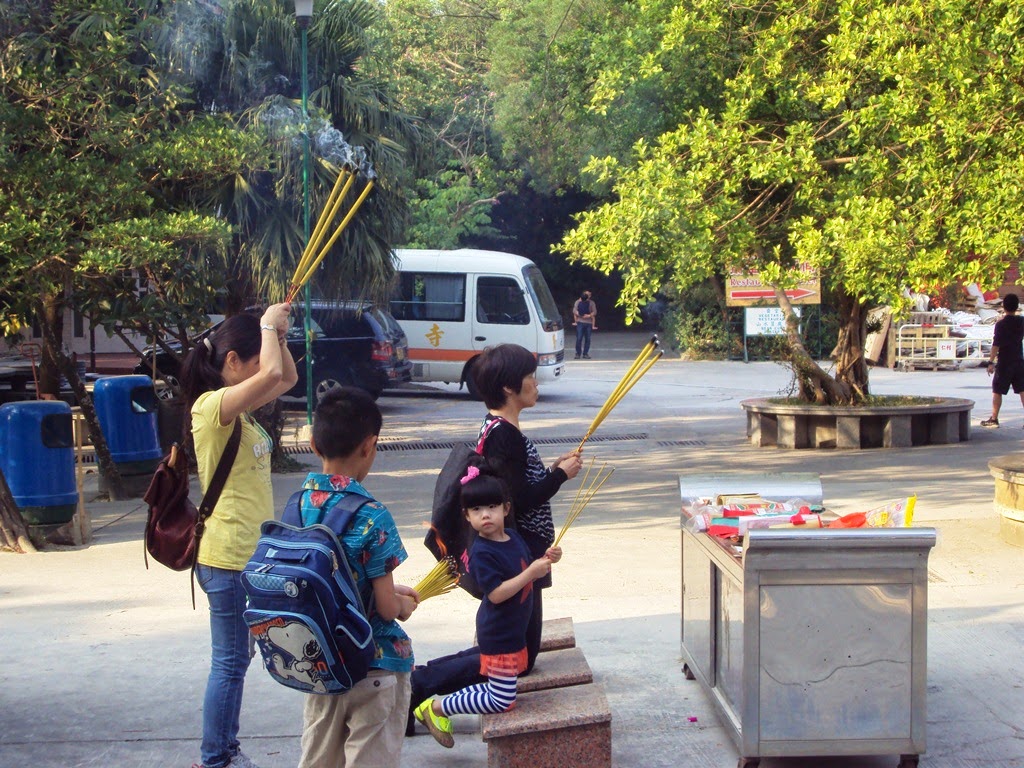 Tummy full and ready to explore!
Ngong Ping has the Po Lin monastery. And the main part of it was being renovated. So nothing much to do there, unless you are doing this. Lighting huge incense sticks and praying. It reminds me of Palani, in Tamil Nadu where you would see lot of people lighting camphor or incense sticks before marching on to the steps (may be 1000 of those) to the temple. 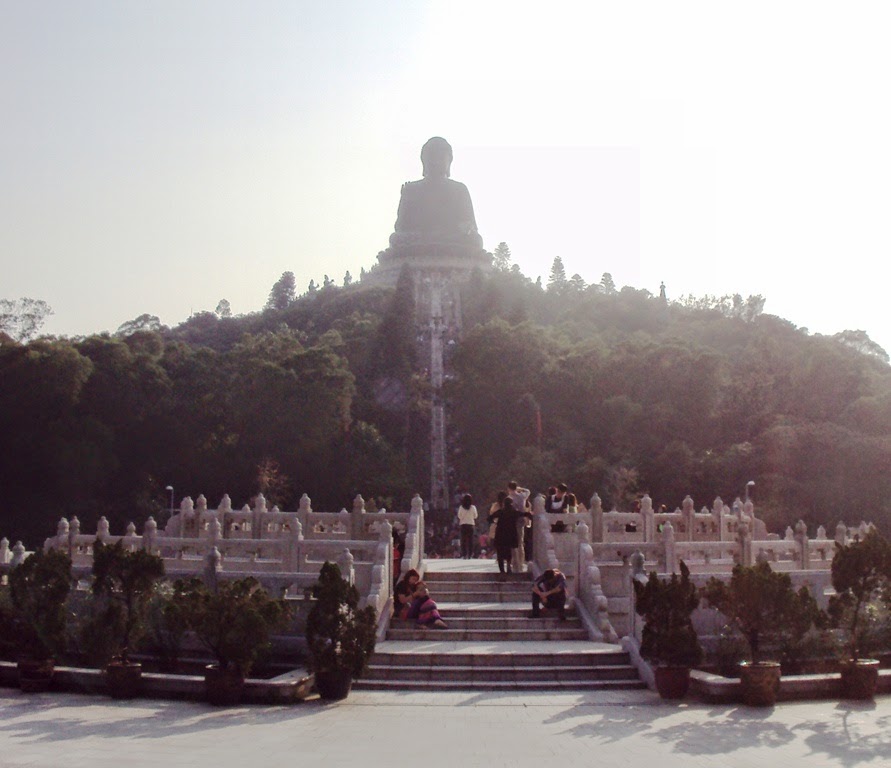 And there might a few hundreds here too!
Getting to the top non-stop is serious challenge. At the top, there is a small museum. I dont know what would interest you there. And some decent view all around. Again I dont think that would charm you as you have seen most of it from the cable car while coming up. Nevertheless, you get a been there, seen it, completed! feeling. 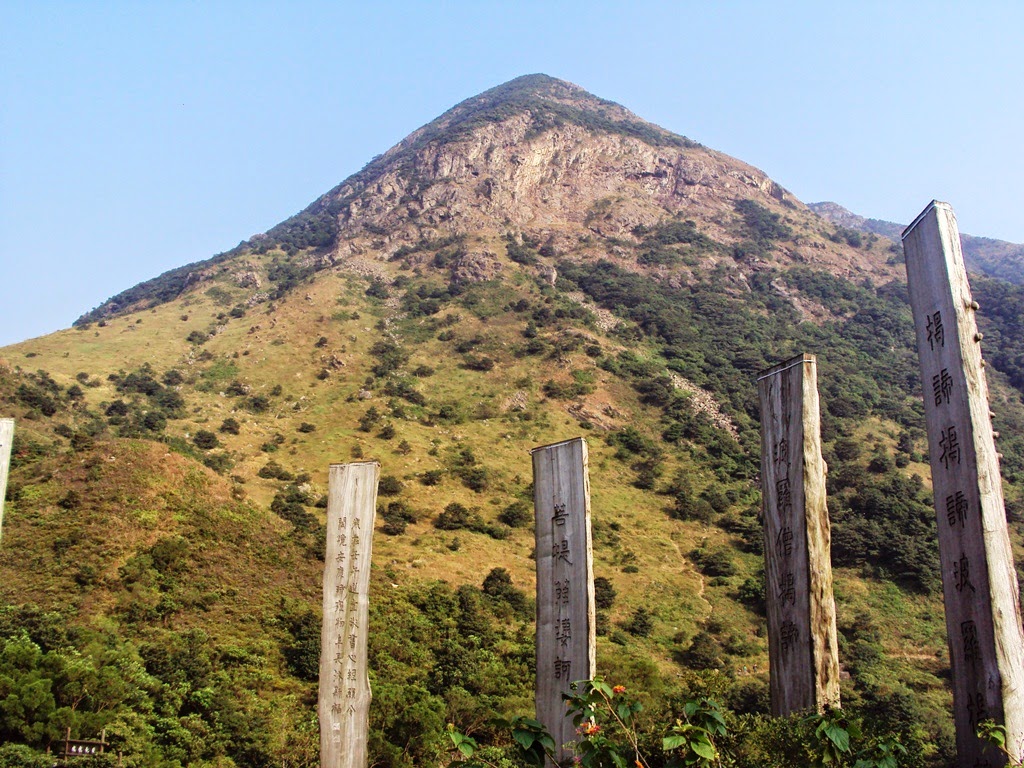 There is also a small trail at Ngong Ping which takes you to the Wisdom Path. You would get wisdom if you could read the scriptures written there in Chinese.

Well all these people who went up had to come down the cable car. So again a waiting time of 30 min, which means I have time only to take the metro to the downtown and watch the Symphony of Lights.

Take a metro from Tung Chung station to Tsim Sha Tsui. Difficult to remember and pronounce correctly. And ya, you have to change trains at Lai King. Walk down the road to the Avenue of Stars. It is equivalent of our Marine Drive in Mumbai or Kochi. A walkway along the Victoria Harbour with lot of statues. If it was in Mumbai, there would be statues of Dadasaheb Phalke, Raj Kapoor, Amitabh Bachchan and many more. If you get there before sunset, you get to see the beautiful Hong Kong skyline across the harbour. 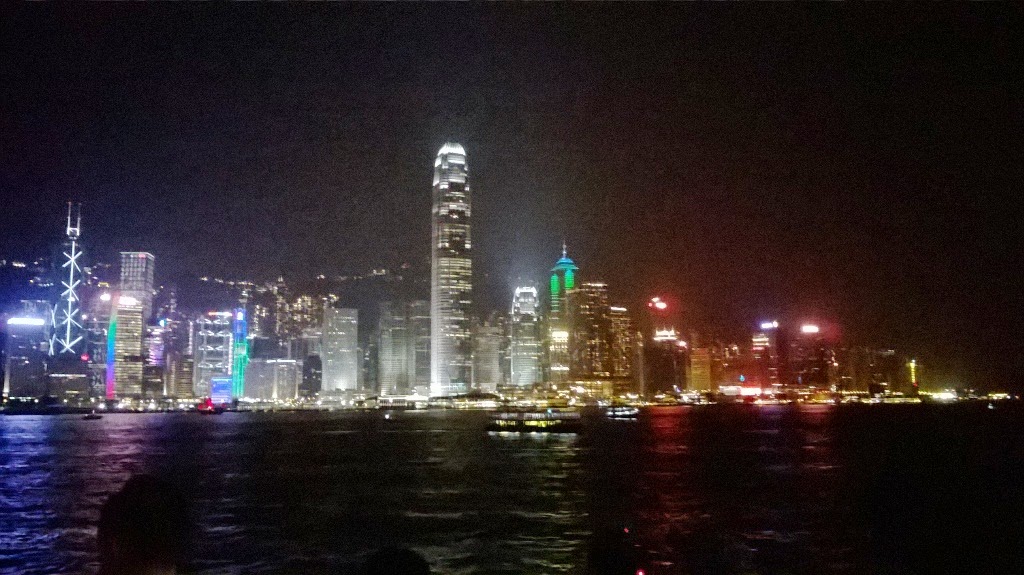 Symphony of Lights is a synchronised laser show orchestrated and participated by most buildings along the harbour. It is a 30 min show starting at 7.30 PM after it gets dark. Enough time left to take a boat ride across to the other side of the harbour and see the skyline on this side. You could also watch the laser show from the harbour if you choose to take an evening cruise. They would have live music, drinks, food and a go around the harbour for an hr or so. Of course the cheaper way would be to be on the ferry crossing the harbour at the precise time :)

By 9PM, I was back at the airport and ready for the connecting flight to SFO.

Overall it was a nice short trip. But I would love to stay there and explore the city a bit more, probably a holiday stop over on a return journey on Cathay Pacific. Surely with family next time.
travelogue