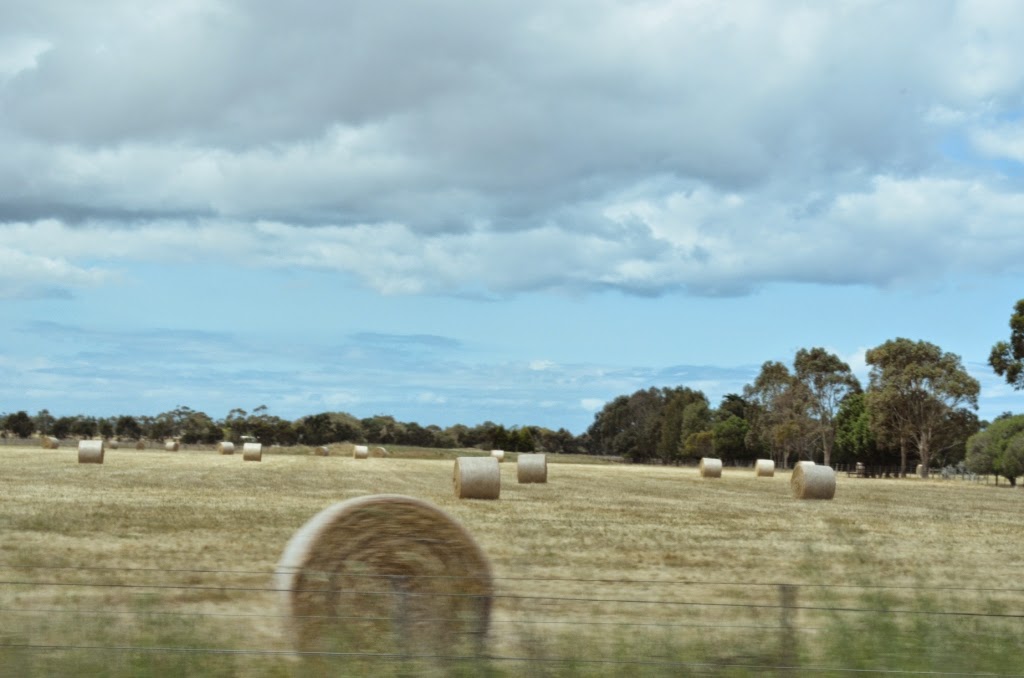 There were 4 adults and 2 kids. In India you could have driven in one sedan, but in Australia babies should travel in car seats. We settled for two cars - a new Honda Jazz and an older Hyundai Elantra.

Driving on wide freeways through the country side had been my dream. Two cars, right hand drive, like in India and Indian license valid in Australia... I was thrilled... But fate was against me. I had forgotten my Driving License. 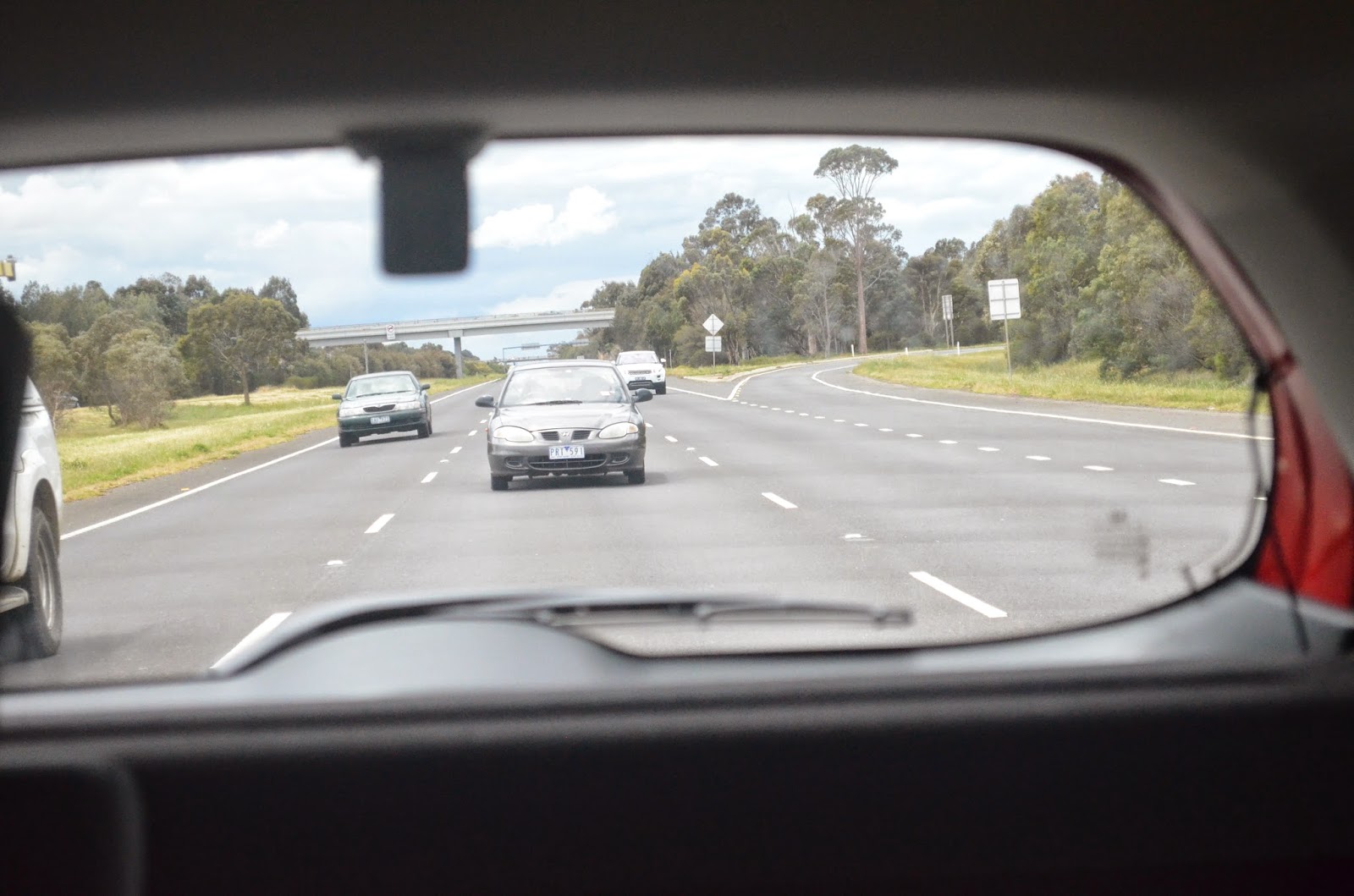 So we set out; with boys in one and girls in another. Of course the boys had the new Honda!!

Passing Hoppers Crossing, we hit M1 expressway toward Geelong. Pras was keeping an eye on the Elantra behind. It was doing pretty well, zipping past other ones, changing lanes with dexterity at 100kmph....

Someone reading this will be happy :P 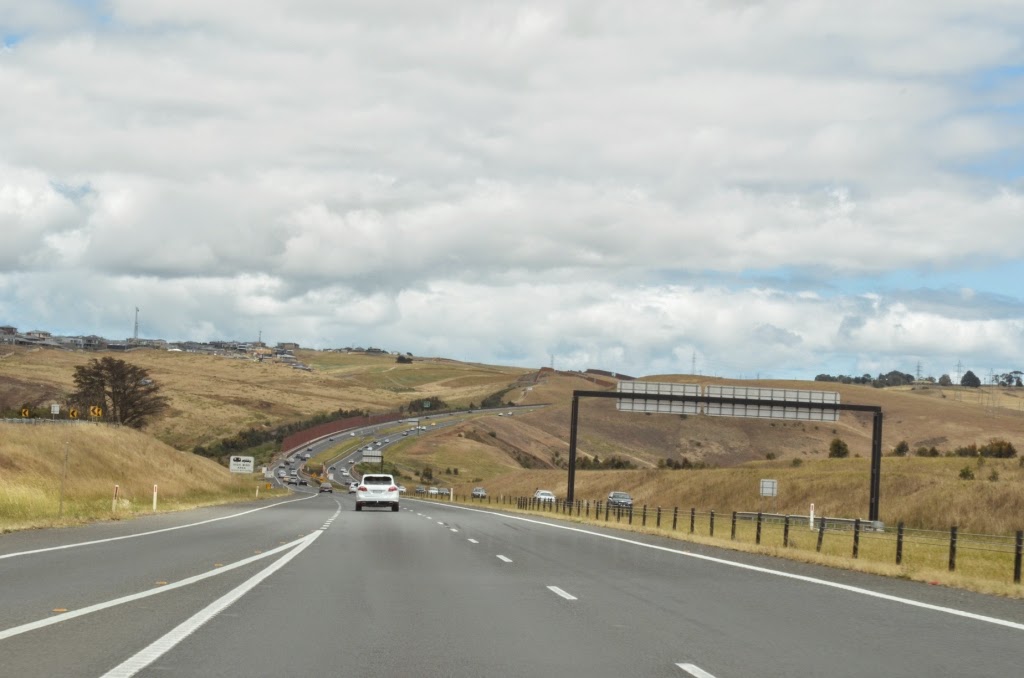 After few minutes, the landscape had changed and kept changing every few kilometers - vast plains of fields, probably after harvest, small hills of meadows, some patches with huge trees lining the highway.

I tried my hands on landscape photography with my Nikon D5100. Some of them were pretty good even though taken from a moving car. Lot of them seemed fine on the 2.7'' display but were actually hazy :(

After you pass Anglesea, you get the first sight of water. Few more kilometers down the highway you get the "Great Ocean Road Memorial Arch". We stopped for a while for some profile pics.. thats what most of the landmarks are for.. to be part of Facebook profile pics. The girls caught up with us and the drive continued.

Now you get the real feel of ocean road. The Pacific comes along with you!! From here on, I didnt regret "not driving". It was fun watching numerous curved beaches and hill contours along them. Pras takes this drive almost every year. But for the first timers it is fascinating. I was in a dilemma whether to just keep watching or see it through the camera viewfinder.

Some sights are best enjoyed with the wide angle lens, that nature has fitted in our eyes.

But the girls were not having so much fun. My wife and kid both were feeling dizzy due to the winding roads and sea breeze. After sometime Varsha had started vomiting and they had tough time pacifying her and putting her to sleep.

Finally, late afternoon we were at Cumberland Lorne Resort. We got a nice Ocean View twin room apartment. This was going to be my most relaxing holiday in any resort - my first experience in an indoor heated pool, spa and sauna. We took a stroll down the beach in the evening sun and walked around Lorne for getting some stuff for next day's breakfast.

Lorne is a quiet little town like almost all the ones that we passed through on the Great Ocean Road. It is dotted with many resorts and vacation suites. People come here with their surf gear mostly in summers when the ocean is warm. This was sort of an off-season, November. The ocean was cold but you could find few bravehearts riding the waves.

Most of the eating joints close down early in the evening as there was not much crowd. We had two options - italian and chinese. For the first day, me and Pras walked to the Italian place and got parcel for everyone. It was good to hear Aussie stories of Pras' past when he first came to Melbourne for his graduation, why he likes it here and decided to stay back rather than returning to India.

During dinner, Varsha entertained us with her antics and dance steps to the now famous "Mangalyam" song.

Our next day was supposed to start early watching the sun rise from the ocean. But the cozy quilt pampered us to sleep more. In order to avoid lot of driving, we had dropped the plans for 12 Apostles at Port Campbell. Instead we chose nearby attractions - Erskine Falls and Teddy's Lookout.

Wait! How can I forget mentioning the super egg burji and croissant breakfast by Masterchef!! 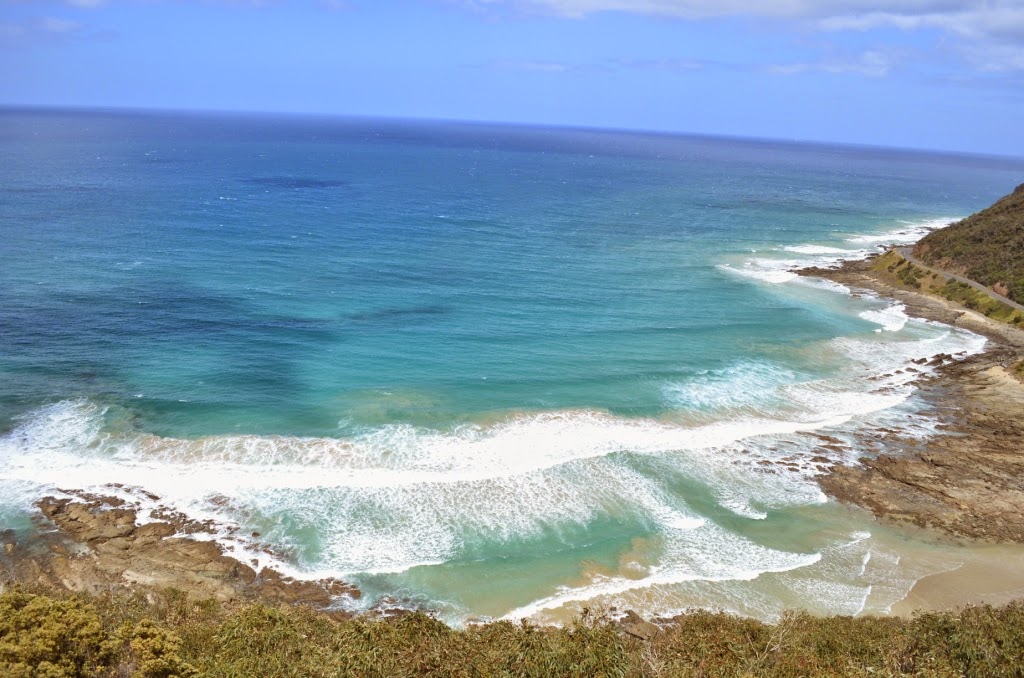 Erskine Falls in the Great Otway National Park was passable and unexceptional. The only good thing there was few 100 meters trek down the forest to get to the base of the waterfalls.

On the contrary, Teddy's lookout was awesome. You reach there though narrow country road and do not expect much. Suddenly out of nowhere, you see ranging shades of blue across the vast ocean. One feels like just sitting there and watch the waters turn dark blue to light, to torquise and then foam up white near the shore. It would have taken many many waves to create the beautiful reef!! 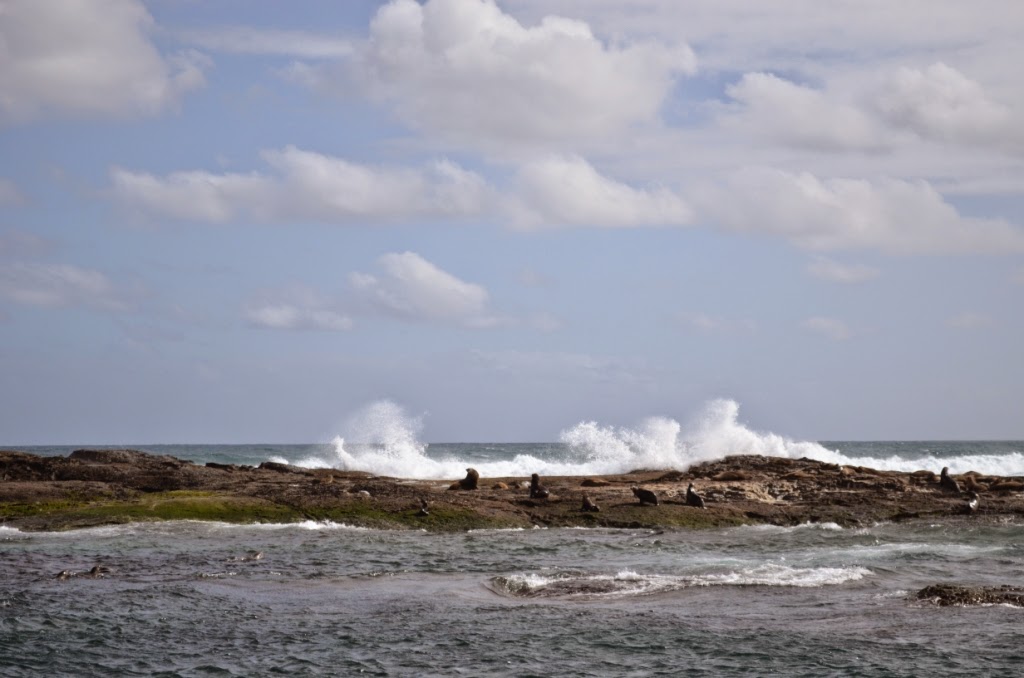 Our next destination was Apollo Bay at an hour's drive. Here we can visit the seal colony deep inside the ocean. The Apollo Bay Fishing and Adventure Tours operate small boats from the harbour. We checked them out and booked for a tour at 3pm.

Finding "vegetarian" lunch is the biggest problem when you travel outside India. And places like this, on the sea front, it is even worse. Luckily we could find a couple of packs of veg fried rice and one veggie pasta. Oh man. It needed so many additions. Women have the art of making stuff edible. With lavish doze of pepper, salt and tomato sauce, we could satiate our hunger with the onakka fried rice.

The boat ride to the seal colony was a mixed bag of fun and misery. Initially it was cool watching the arched beach and the hills beyond. As we ventured deeper, the breeze got really cold. And add to it, the roller-coaster ride throwing us up and down as the boat climbed each incoming wave. Despite prohibition, we managed to get inside the driver's cabin for some respite from the chill.

The seals were plenty but camouflaged well on the rocks. I was amazed at their size!! Each one could easily be a few quintals. Most of them were lazying, enjoying the sun. 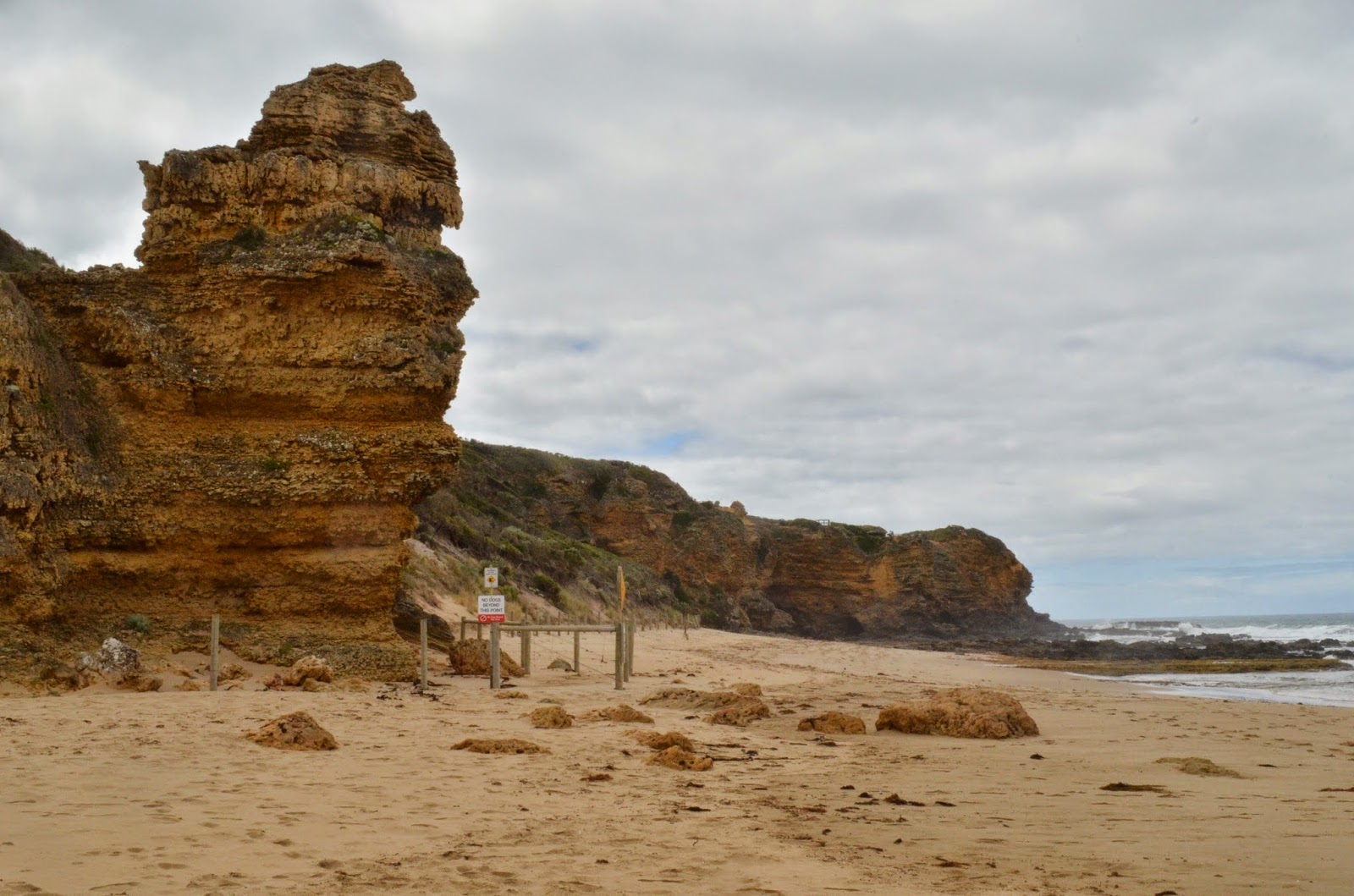 Next day was pack up from from the resort. We bade good bye to Lorne after a wonderful Australian breakfast of poached eggs and hash browns. The day was cloudy but warm, excellent for spending time making some sand castles. Its time for Pranav to teach Varsha how to play with his sand toys.

Since we missed out on 12 apostles, we chose to stop by at Aireys Inlet near the Split Point Light House. This place had few small samples of the eroded soft limestone cliffs - a miniature version that we christened 3 apostles!

The trip ended with a sumptuous Indian lunch at Bikanos in Werribee.

Phhew!! Finally I finished the blog. This is probably the longest one, in terms of time taken. 2 months and 2 days!!

Prasanna said…
Awesome! Is Sydney next on the list?
3:22 PM