October 10, 2015
After a wonderful trip to the Great Ocean Road (read here) and rest for 2 days, we set off for another one eastwards. We had booked the early morning flight on Thursday. As we were flying JetStar a low cost airline which charges for checkin baggage, we had pre-booked only 20kgs. That seems fine. How much would you carry for a 3 day trip!

Our suitcase which seemed pretty light on our hands showed 15kgs on the weighing machine. PrasSree had packed reasonably well at 10.5kgs. Re-packing begins!! Fortunately we had lot of margin in hand baggage allowance. So - lighter stuff from hand baggage to check-in one, heavier ones (guess what! 4 jeans, jackets (not that it would be too cold in Sydney.. but still you never know), toys) shifted to hand luggage in numerous pick-ups (we could take 12 pieces). Co-bro was little angry with the huge queue and the mess we created but we escaped his ire.

Domestic terminal at Indian airports see lot of crowd and hence serve decent variety of food. Melbourne was different. Coffee and muffins was all that we could grab. It reminded me of our France trip (here).

More than two, in fact!!
Sydney welcomed us with a drastically different climate as compared to Melbourne. From the parking lot to the terminal at Melbourne we had overcast sky and chilly winds that brought out whatever we could put on more. On the contrary, waiting for the formalities of rent-a-car to be complete, we had sweltering sun, baking and dehydrating us.

Second one was a pleasant one. The vehicle that we rented. A brand new Holden Captiva 7 with cruise control, electric sunroof, parking assist, smart key entry, automatic headlamps etc. etc. Wish I had brought my driving license :-(

It was a pleasure to be in an SUV and all of us voted that our next vehicle would be one of this sort.

Plan that dint work out

As my friends say "You have relatives wherever you go". My cousin's house was around 40kms from the city. Our plan was to catch up some tourist spots before heading home. It was changed to go home and come back after lunch. And the weather app notification (dry and 48 degree Celsius) changed it again to "go home and relax". 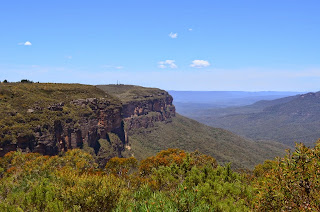 After lot of discussions and planning, we decided to visit Blue Mountains on Friday. It would give us a different scenic view of outback Australia - dense forests and sparse population. Keeping up with our leisure pace on this trip, we got ready by 10 o'clock. The day was already hot and was predicted to be similar to the previous one. But it would be comparatively cooler towards the mountains. We were warned (or I should say terrorized) well about the ill-effects of UV radiations. Australia comes under highly depleted ozone layer region and has very high amounts of UV radiations when it is bright and sunny. Smearing all the exposed parts with lavish quantities of sun-screen lotion, I resembled Javagal Srinath walking out to bowl on Day 1 of Boxing day test match. 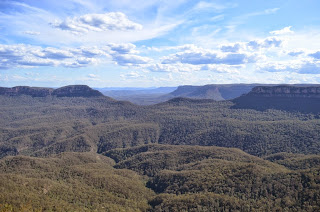 Another highlight of the day (and the city tour the next day) was the picnic lunch. My cousin's wife was super energetic to prepare and pack lunch and snacks for all of us - that too before leaving for office at 8 AM.

The drive to Blue Mountains was fantastic, kudos to the comforts of the SUV and "calm" driving of Pras. To be honest, he was unhappy about the frequent changes to the speed limit zones that limited the use of cruise control feature. For SL and little VG, this was wonderful vis-a-vis the Great Ocean Road drive.

This should have been our motto; it wasn't on this trip. The main attraction of blue mountains is of course the scenic view of the mountains, valley and the 3-sisters formation. The next one was world's steepest railway which takes you down to the valley. And there are cable cars that give you good panaromic breathtaking views.

As I said, we chose a relaxed approach to see the vista points as we drove in a semi-circular route. The first one was a waterfall. From the parking lot you get nice views of the mountains, but the falls are nowhere in sight. Following the trail routes, we trudged along for few minutes. The sun was pretty hot! At one point we got a glimpse of where we were heading to - close to half a mile down. Considering that it was already noon (kids were hungry) and nobody wanted to climb all the way back, we settled down for lunch in the picnic area.

Eating "curd rice" anywhere in the world is a sign of a Tamilian!! 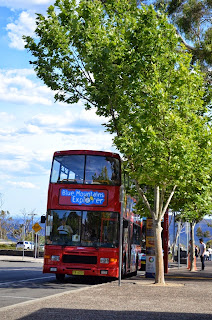 Next stop was Leura Cascades. A series of many small cascaded waterfalls. It was nice and  calm place with lot of shade and cool water. We dint realize the amount of time we spent there, till we reached Echo Point. Here some time was lost in getting little VG to sleep and getting some refreshments.

A look at the watch showed 4 o' clock. That's still afternoon by Indian standards. But here in Australia, everything shuts down pretty early. The Blue Mountains Scenic World, the place where we can get to Katoomba Scenic Railway and cable cars would be closed for entry by 4:30. And the place closes at 5:30. That too in summers when they have sunlight till 7!! :-(

Pras and Sree would be little disappointed as a day was wasted.

Echo point probably has the best panoramic views in Blue Mountains. Lots of photo opportunity - The Three Sisters, mountains and plateaus, the dense vegetation down in the valley. 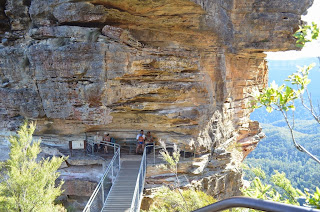 Seeing some people near the Three sisters, we explored the trail that took us down the dusty and broken path. A rickety bridge connects to the ledge cut out on one of the Sisters. From there one could see the rocky face of the echo point and the cable cars. The steep climb drained our energies and all folks in the back seats fell asleep.

The day ended with superb dinner at Chatkaaz at Harris Park, a little India in Syndey.
travelogue