Singapore was on our travel list for a long long time, ever since budget airlines made their way to Indian market. So were Thailand, Indonesia, Malaysia and all the tourist destinations that you could fly from India at almost the same fares as domestic flights. All of them were part of the itinerary search list as stop over points on our way to Australia.

Singapore got selected as it is always best to be in places where you dont have to worry about deciphering the restaurant menu, especially with a small kid. 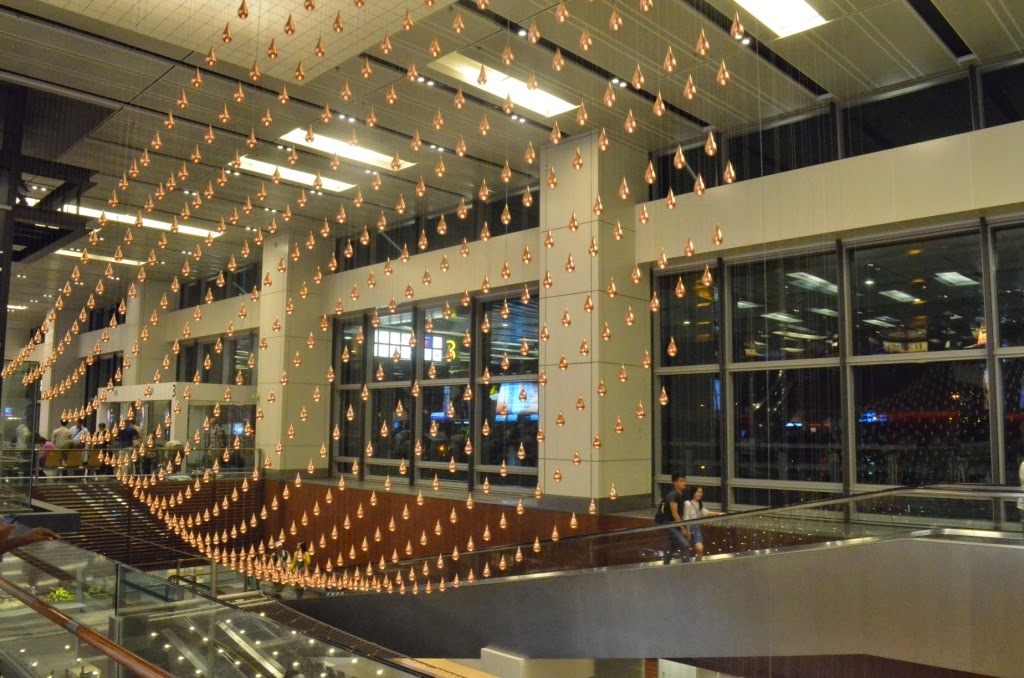 It was 1830 hrs local time when we touched down. Coming out of the aero-bridge and entering Changi Airport, it looks like most of the other big international airports. But when you start walking, on your way out and read the sign boards, you realize how big the airport is. You see directions to "Terminal C via Sky Train", "17 min walking to Terminal 3" and numerable attractions on the terminal map. It feels like you can spend a day in the airport and still leave something more to see when you come there next time.

1915 - We pass through the immigration without much fuss
1935 - We get through the priority boarding queue for the taxis that allows you to jump the normal queue. That is a boon if you have already spent 20 min looking at the queue getting bigger and bigger while your wife struggles with the kid, getting her to drink 100 ml of milk.

2015 - Reached Telok Blangah. Lugging along all the baggage and getting to the 9th floor we realize Flat #09-22 Not Found! We knock on the door 09-11. An elderly guy opened the door. "How do we get to flat number 22?" "!@$@##" I guess he said he does not understand. We ask again. This time much slower. This time he says "Next Lift". Okay fine. Get all the baggage back into the lift and go all the way down to ground floor. By now I got a sense of Singapore's climate. Hot and Sultry. Man! am I in Chennai or Kochi or any of those tropical places by the sea side?

After discussing all the permutation and combinations, the plan for the day was set to cover the Singapore city. We packed the essentials - EZ Link cards, metro map, fully charged camera and phone (for GPS), chips (very very essential, you would know later why) and baby food. 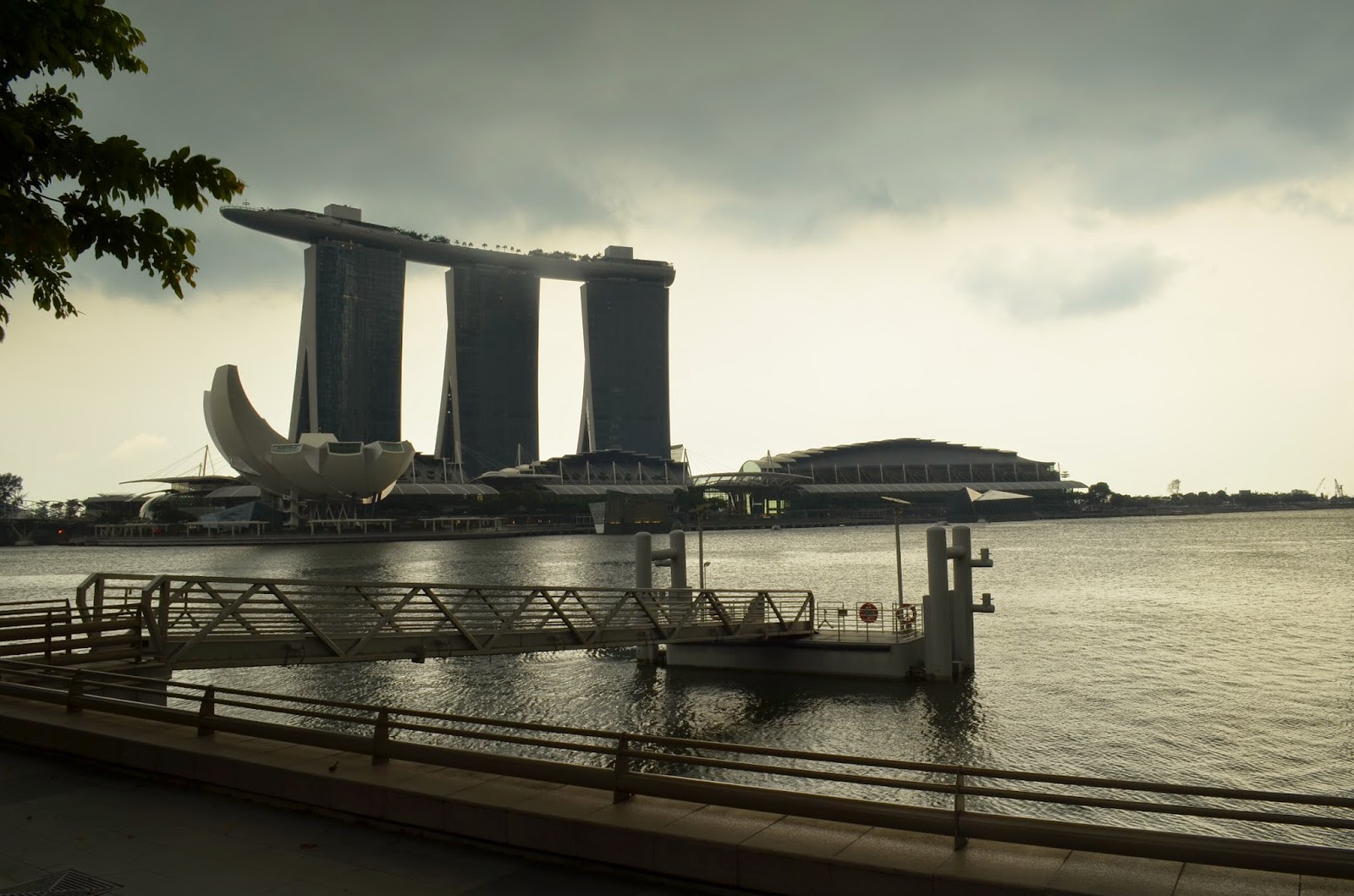 EZ Link cards are the best way to move around Singapore as they are valid on all modes of public transport - metro, buses, taxis etc. You can also take a Tourist Day pass if you plan to do a lot of travel on metro/bus. My cousin had a few spare cards so we went ahead and topped them up. For us SGD 10 was sufficient for two days travel.

It was our wedding anniversary (obviously the trip was planned to celebrate four years of togetherness). So the first destination ought to be a temple. On the way to Telok Blangah metro station, my wife spotted a Malaysian/Singaporean temple. It seemed like a Buddhist place but very different from what you would see in India. One interesting thing was around 50 spiral shaped incense sticks (Agarbatti) hanging from the roof.

Our plan was to go to Mariamman Temple at China Town, which is the oldest Hindu temple in Singapore. We took the metro from Telok Blangah to China Town, with a change of lines at Harbour Front. Chinatown is a misnomer I guess. All over Singapore you could see lots of signboards in Chinese (or whatever that symbol language is)! The Mariamman temple is magnificent. The main santorum was closed when we reached there. Luckily there was a pooja at noon that we could witness.

You could do a lot of walking in Singapore if it is breezy. And it was pretty good that day if you are walking in shade. But out in the sun, it was pretty hot and humid. From the temple we walked down the market street in China town which sold all kinds of "I Love Singapore" memorabilia. My wife is a fan of such stuff so we spent half an hour sampling many of those and buying some.

Next stop was for lunch - and what could be better than Little India. Again the metro. Oh yes. I forgot to mention that we got lost in between. At the Chinatown metro station, I was pushing the baby pram trying to find a elevator down to the platform and my wife just went down the escalator mindlessly. After some nervous moments she emerged back at the street level. By the time Varsha was awake. So ultimately we just folded the pram and went down the escalator itself :-P

Little India was indeed Indian. The first thing I remembered was the Lake market at Calcutta with rows of shops and most of them displaying wares on the pathways too. My wife got a $1 gift - a string of jasmine flowers that all South Indian ladies love to put up on their hair. Lunch at Komala Vilas was good. They served good unlimited south indian vegetarian meals. 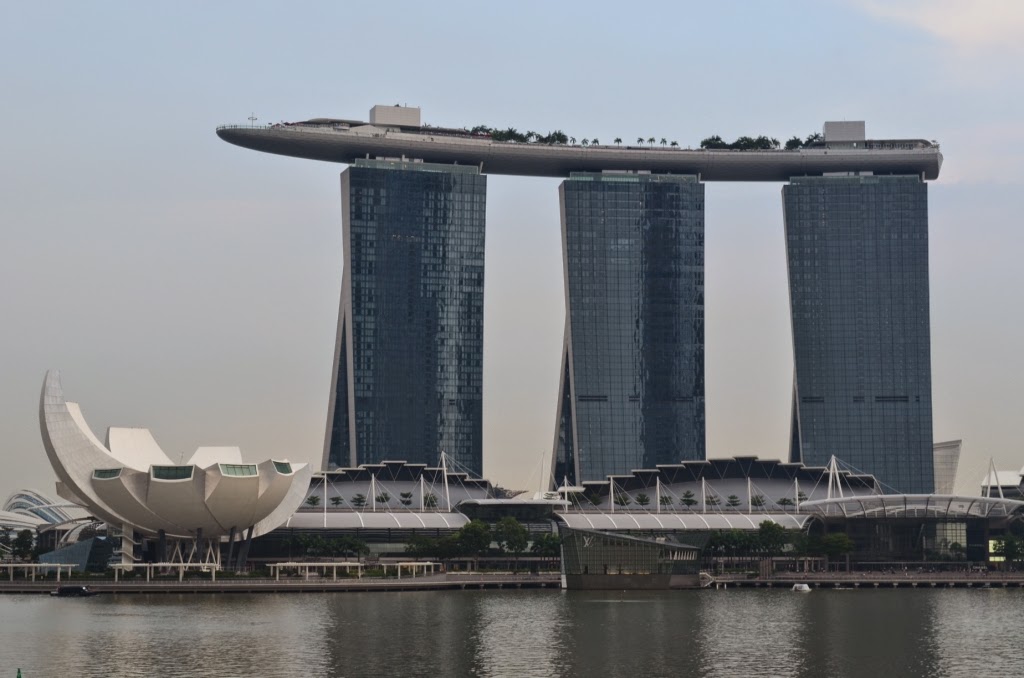 Shopping!! How can women not do that if they walk down a market. After passing by few shops and resisting  temptation, Sreelatha got into one of those shops with lots of fancy stuff - bangles, chains, earrings and what not. It was pretty hot to walk in the afternoon sun. So me and Varsha enjoyed some games and experiments with our SLR.

So far we haven't seen the Merlion! The next plan was to take the metro to Esplanade and walk along the bay to the Merlion or Marina Bay Sands. By the time we reached Esplanade, we got the experience of Singapore weather. It was hot and humid in Little India and here it was murky and windy and cloudy. Marina Bay Sands hotel (the three towers with a boat like structure on the top connecting them), the downtown skyline (each skyscraper with a name of some financial institution), Merlion (water gurgling half lion half mermaid statue), the giant wheel (like the London Eye). All of these against the backdrop of dark clouds was fantastic. The esplanade was relatively empty and Varsha had a good time running around. 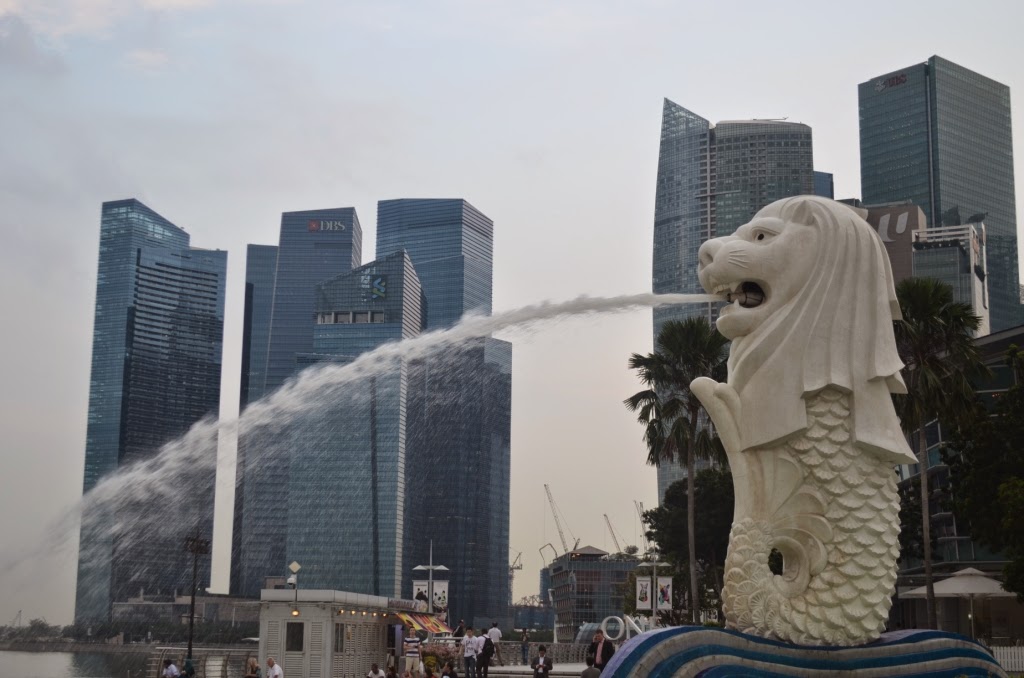 Slight showers for few minutes gave us some time for a coffee. And of course the banana chips. Remember I told you earlier that it is crucial! This is the best way to get Varsha drink milk. Give her some chips and she behaves like a good girl. If you don't she would make all nearby heads turn around with her noisy fuss.

We walked along the bayfront to the Merlion. The weather was excellent after the light drizzle. We spent almost an hour there doing nothing in particular. It reminded me of the "India Gate" at Delhi. During IIT days, we used to go there simply to sit on the lawns and enjoy the evening watching the crowd, kids playing, hawkers selling balloons and mini helicopters. We would wait till it gets dark and the India Gate is lit. Here too we waited till the skyscrapers all around started twinkling. By the time we found our way to the metro (I think Raffles Place station), it was 7PM. 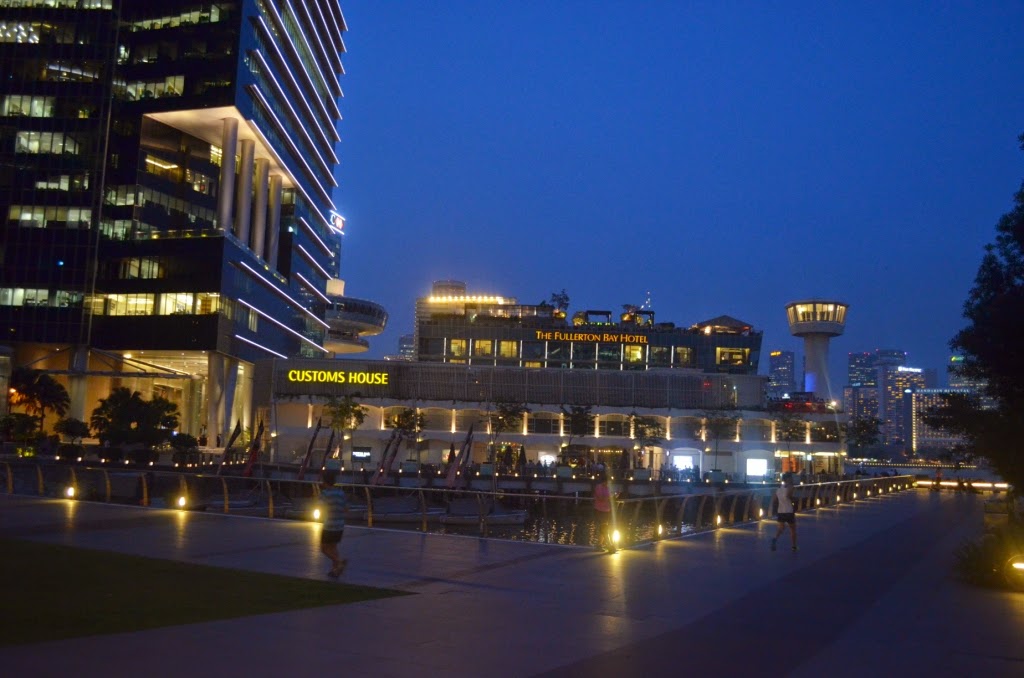 With lot more to see around in downtown Singapore, we bid good-bye to Merlion and left to meet my wife's best friend from school for dinner at her apartment in Ang Mo Kio. Awesome 4 course dinner (I wont describe what the menu was, lest you all will feel hungry) and lot of gupshup and trivia about Singapore's city administration and infrastructure. On the way back, we took the metro (which had decent enough crowd at 11PM) and appreciate how well the whole city is connected with public transport. Wonder when our own Bangalore will become like this! 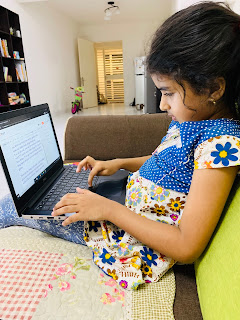 I am a kid and I am staying in my house due to corona virus. I am a bit bored of staying at home so I am writing this blog so you won't be bored.


"What do you do to entertain yourself?"
You can ask your friend to come and play with you.With your friend you can play games such as snake and ladder, ludo, zenga blocks etc.
You can do craft, you can draw and paint pictures, watch TV and do many other things. It is fun to do these things. If you get bored of doing the same thing again and again you can invent your own games.

These are the things I did today: at the morning I did some worksheets which are sent from school. Then I called my friend to play with me. We played a new game called "Complete the picture by closing your eyes".

Bye Bye. See you next time when I write another blog. Till then, Stay Safe, STAY HOME.

March 31, 2020
The past experience of juggling work and studies from research days at IIT Delhi keeps reminding me of the struggle. Working on the weekdays and visiting the laboratory on weekends for research. By the time I get to second gear and do something meaningful, I realize that it is already Sunday evening and I have to get back home and reset my mind for the office tasks. It feels like we dont have enough time for either and end up sacrificing one for the other.

The thoughts of studying in college were shelved in 2011, yet they resurface once in a while during me and my wife's late night chitchat. One such idea was to do an MBA. The inspiration for an MBA came from a visit to a relative, Vice President of Sales. A chauffeur driven Mercedes Benz, full time maid at home, posh apartment in South Bombay and high-flying executive travelling all over the world. Getting to similar position starting as an engineer is a distant dream. We thought an MBA would give me the required skillsets to ju…
Read more